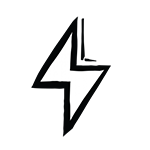 I talked my friends at audio studio Full House Productions into letting me use them as guinea pigs in a new idea I had. I wanted to use office voicemail as a B2B advertising medium. This was 1993. No one had done this before. Here’s how we did it:

I wanted this campaign to create new client opportunities for Full House Productions, so our target market was ad agency writers, creative directors, and broadcast producers.

My copywriter Andrew Payton and I called all our friends in various ad agencies asking them to send their in-house phone lists to us. We recorded several teaser messages, produced by Full House Productions with tons of sound effects. The final reveal message would be played on a Friday. Because we were calling agencies all over the country, we had to come into the office at 5:00 a.m. every morning to play the “spots” onto people’s voice mails.

The results were amazing. Full House got tons of calls, and one really great one from Goodby Silverstein’s creative director saying how much the campaign had inspired them.

Pissed Off Ralph Nader with First Ever RDS Campaign Outward Bound Campaign
Scroll to top
%d bloggers like this: